Finding a Life of Passion on a Motorcycle


The last day in Saigon.

My flight to Jakarta was not until 9pm. So in theory, I had the whole day to roam around.

I first intended to do a walking tour, by self not by joining any real tour cause I love trying to figure out my own ways (and getting lost at times), in the city center. But then, after walking since 6am, by 10 I was already feeling a bit weary. The result of walking too much the other days too I guess!.


By the time I finished looking around the Reunification Palace, I was beginning to wonder if I'd have the energy to walk everywhere else!.

As I was contemplating on my map to decide where to go next that was easier for my feet, just outside the Reunification Palace, a motor taxi rider (or 'ojek' we'd call them in Jakarta), called me out and said he could take me to many places, with the rate of 200,000VND per hour. I thought that was quite expensive for a motorcycle ride but what the heck!. I was on my little holiday. Plus my feet were beginning to kill me. So I jumped on his offer. And not once did I regret it.

He took me everywhere!. We went to China Town area – which was about 20 minutes ride from the city centre. He also took me to what he called ‘City 2’ – a new development area across Saigon river. He took me to places in the city center too. So within that day I actually saw a lot more than I planned to!. 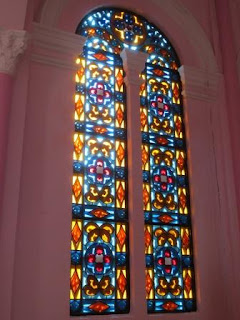 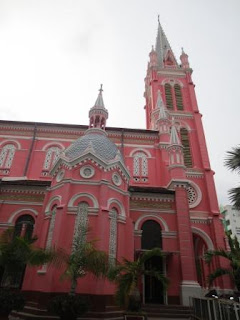 Apart from the fact that he’s taken me to places that I did not plan to visit, which was great!, the beauty of an encounter with a local as always is the story he or she would tell you. This guy, Binh he said he’s called, has an interesting story.

Binh is a Saigonian. Born in 1972, he was raised in Saigon and it was really clear that he loves the city. He hates the name Ho Chi Minh – saying it’s a, “name that only reminds me of the war!”. Of course he did not experience the war. But everyone talked about it. His parents talked about it. So he got familiar with it too.

He loves the name Saigon cause that’s, “romantic and beautiful, you know” (he said ‘you know’ a lot). He then explained to me what the name means – something of a tree that grows on the streets of Saigon. Not quite sure I got it right, but I have to admit he’s got a point. To me a hero’s name should be used to name a street or a building or a monument, not a city. Too functional if you ask me.

He apparently was once sent to Melbourne in the 90s (where I lived for two years! What a coincidence!) by a local company to learn about IT. He worked there for a year, then returned to Saigon. He then taught computer in a high school, for 7 years, before getting bored of it.

I asked him: but isn’t life getting more difficult everyday?, and there are so many people doing what he does so he’s competition is getting fiercer, would he think he’d survive?. And he’s got a son to raise as well!.  He calmly said while everything’s become more and more expensive, but as long as he’s happy doing his job, he doesn’t mind. “I frowned everyday as a teacher, for what?. This makes me happy. I meet people, nice people. So I’m happy”. I couldn’t help tapping his shoulders with a big smile on my face and said, “My man, you’re cool!”.

Then outside a temple we visited, just before we left, there were two westerners with two young Vietnamese ladies. He pointed at them, and asked me with loud voice too!, “See, crazy?. Oooohh I love you, baby come here. Get dollars, fun fun for 2 weeks, then bye bye”. I had to ask him to lower his voice down cause one of those guys looked at us.

As we rode off, he continued saying that he pitied those women who were obviously just looking for money from westerners. He said if they were his daughters, he would give them a good beating so they get sober.

I thought that was just a sentiment of a local guy seeing local girls taken by foreigners. Until, he surprised me with another story.

His wife, apparently, went off to the USA with a guy 2 years ago. She never came back, not even for their son. So he’s been raising his son alone, with the help of his parents to take care of the boy when he’s out and about.

Now. This can or cannot be a true story. But looking at how strong he reacted at those people at the temple, my gut feel told me this was true. He went on talking about his wife who loved money more than she loved him. It was very clear it was a sore experience. Oh well, who wouldn’t be sore with an experience like that!. I couldn’t comment, just listened to him quietly and hoped he didn’t just ram the motorcycle onto a tree or something because he sounded so angry!.

Luckily he calmed down, and he was normal again. And he began pointing his finger here and there again, showing me all the lovely old buildings.

He said, “I love old buildings”. If I didn’t know that he was a well educated person, I would be very surprised hearing that. Who would expect to hear that from a motor taxi rider!. And I knew he’s meant it. I think he enjoyed the whole trip as much as I did!. At every place we stopped, he too stood and admired the whole thing. Also trying to show me all the ancient this and ancient that. He also pulled out his Lonely Planet and showed me where we were (cause most of the time I could not pronounce the name of the place we went to!). Everytime he did that, I could hear the pride in his voice. This was a guy who truly loved the city.

When we were at the new bridge at City 2 and enjoying the skyline of City 1 (or Saigon’s District 1) – I asked him, “Are you proud to be a Vietnamese?”. He said, “Yes I do. Vietnam will be a strong country, you know. We develop so many things here. Look at this, just like Hongkong, right?. You come back here 5 years from now, you’ll see! There will be more buildings here. We will be great”. I couldn’t help looking at him and smiled when I said that he should be praying at every temple that I will come back cause I’d love to see all that.

So he became my tour guide for 6 hours. I had to say it was quite an experience cause I didn’t plan it at all!. And to think that I was actually scared of getting onto any motorcycles until 6 years ago I had to work in an office on Jl. Rasuna Said and finally got used to ojek!. It was so much fun to roam around parts of Saigon that way.

But apart from that, the chance to know a real soul is always a part that I welcome in all my single travels. Cip said that when we travel alone, we make a lot more effort to open up because we have to. And that’s when we’ve become most receptive to people’s stories. And when we do listen to those stories, we not only learn about them, but more, we also learn about ourselves. I’ve experienced that again and again.

And in Saigon, through Binh’s life stories, I learned. About really finding your way into something that you love. And when you’ve found it, you’ll always feel that nothing is too difficult even when circumstances are not getting any easier. Sometimes you have to travel far and wide. Sometimes the road is long and winding. But every path is worth to take because when you realise you’ve gotten there, you know you’re gonna be paid with a lot of gratitude in your heart, and a lot of contentment. 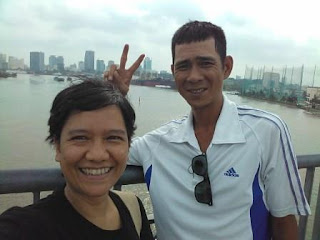 What's in my mind